It’s me, Brant Reader, just gazing into the atmosphere pondering something

deep and insightful, I’m sure.

How do I go about this?

Should I write in first or third-person? I heard it’s best practice to use third-person for your ‘About Me’ page but I don’t know, that just seems a little weird. Whatever, I’m just going to do this thing the old-fashioned way.

Hey guys! I’m the random dude above staring off into space who happens to run this website. You’re here, so you must be somewhat interested in who I am and what I have to say. Well lucky you, because I’m going to tell you a little about myself, this website, and some of the things I like to dabble into on these here interwebs.

Comparing myself to two online business moguls? Yup, that just happened. It’s a bad example, I know, but you get the idea. This is the place where I write about and share the things I’m interested in. Predominantly, it’s online business and entrepreneurial stuff, but every now and then I sprinkle in other goodies as well. 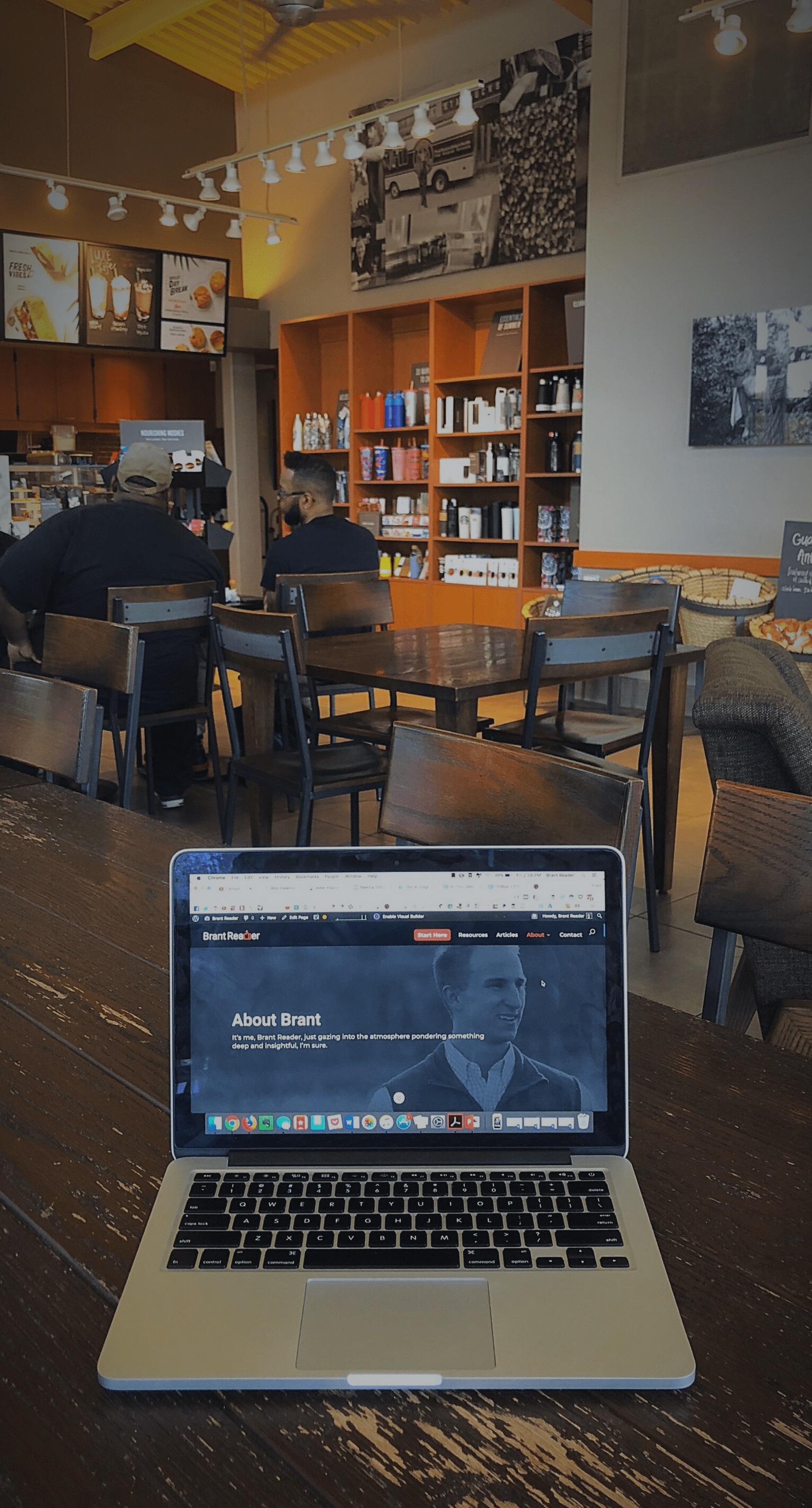 Really, I just wanted a place where I can share and document everything going on with my businesses. Hopefully, by doing so, I can help you along your journey as well.

Hot take: I really don’t care if this website makes me money or not (even though, disclaimer, I do have a few affiliates links throughout some of the pages and posts here). That being said, I don’t need to make money from this website. That’s the beauty of already having multiple income streams. Any money made or affiliate revenue generated here is just icing on the cake.

Who am I and what have I done?

My name is Brant Reader.

I got started making money online all the way back in middle school by selling Pokemon cards on eBay. 😎 I guess you could say I was a big-baller businessman. Not. But it was an easy way to make some extra spending money at the time.

Eventually, I expanded my eBay business to reselling items from thrift stores for profit and then even wholesale lots. My eyes were opened to the fact that you could really make money from home using nothing but your laptop, all thanks to eBay.

To this day, I still resell items on eBay. Mostly because it’s a fun (but also profitable) hobby and an easy source of income.

Then, in 2016 I started a website (that I haven’t yet revealed the name of yet except to some of my closest family and friends). About a year later, said website actually began to make enough money that I started taking this internet marketing stuff seriously.

I got addicted. I read as many books as I could get my hands on. I stopped listening to music altogether and only listened to podcasts 24/7. I was able to learn a ton of information in a short period of time, and now, that same website has continued to grow each month and has allowed to quit my job and focus on building online businesses full-time.

How do I make money online?


As I mentioned, I run my main website and it’s what brings in the majority of the income I make online. It makes money mostly from selling digital products, particularly eBooks and online courses. It also makes some money from advertising (Google Adsense) and affiliate marketing (Amazon Associates). Then there’s the YouTube channel that generates leads back to the website and also earns passive income each month from ad revenue.


I still resell items on eBay. I absolutely love going to thrift stores to see what gems I can find and flip for fairly large profits. It’s more of a hobby to me than a business, even though I do consistently make pretty good money doing so. The income generated is just an added bonus.

I run a handful of other niche/authority websites with the goal of growing them slowly over time, similar to how I did with my main website.

I run a Shopify store that I’m also trying to build and grow.

I have multiple books published on the Amazon Kindle p that bring in passive income each month. You won’t find them through search, however, because they’re all written under pen names.

I also sell new items on eBay via dropshipping. In a nutshell, you can find items on different websites that are selling at a certain price point. Then, you list them for sale on eBay at a higher price. When someone purchases the item from you on eBay, you go back to the website, order the item, and have it shipped directly to the customer from eBay. You earn the difference as a profit. I have outsourced this entire process to the hard-working virtual assistants on my team.

Boom, congratulations! You now know the constructs of my online business.

It doesn’t sound like much, and to be honest, it’s really nothing fancy. But collectively, each income stream that I mentioned adds up to a monthly total that’s enough to where I’m no longer required to work a conventional job. This gives me the freedom to live life on my own terms, and for me, that’s what it’s all about.

After graduating from college, I worked as a Registered Respiratory Therapist for two years. The job itself was fine, working in the medical field and all, but it didn’t take long for me to realize that I wasn’t truly happy. Sure, it was rewarding being able to help patients in need, but I knew I was never going to truly feel fulfilled until I was my own boss. Working night shift, where there is usually some downtime in the hospital, gave me extra time to build my online business to the point that I could finally take the plunge and leave my job for good.

I graduated from the University of Mississippi in 2013 with a degree in Exercise Science (Hotty Toddy). Admittingly, I care way too much about the outcome of sporting events concerning Ole Miss. I’m aware that this is a problem sometimes and I’m actively (but still unsuccessfully) working to correct it each and every year.

I go to the gym six days per week, every week, so I guess my degree wasn’t a (complete) waste. People often ask me, “When did you start taking fitness so serious?” And my answer is, “Never.” Yes, I do workout every day but you won’t see my posting mirror selfies or progress pictures to my Instagram account like most bros nowadays. I workout frequently simply because it’s good for my body and mind and I like the way it makes me look and feel. I will not skip a day at the gym.

My wife is extremely smart. She’s a full-time student and will soon be an optometrist. She supports my crazy ideas and tolerates the entrepreneurial geek that lives within me.

I set big goals that, I’ve noticed, change almost every year. It’s fun to document my goals as I strive to them. I feel remarkably blessed and grateful to be in the position I’m in.

I’m very thankful that you’re here, on my personal website. If you like what I’m doing and want to follow along with my entrepreneurial adventures, you can sign up for my newsletter. Don’t worry, I will never send you any spam, junk, or nonsense. Just helpful lessons and stories every once in a while.

And when you’re ready to get started on your own journey, be sure to check out my favorite tools and resources that I use to keep my online businesses afloat. I think you will find them useful as well.

This is the footer of my website. Thank you for scrolling down this far. You are a cool individual.